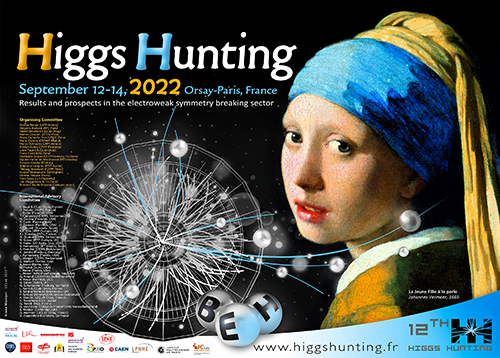 The origin of Electroweak symmetry breaking is one of the central topics of research in fundamental physics. The discovery of a Higgs boson at CERN on July 4th, 2012, following a hunt that spanned several decades and multiple colliders, changed the landscape of these investigations and provided key evidence for the Brout-Englert-Higgs mechanism of mass generation through the spontaneous breaking of Electroweak symmetry.

Almost ten years later, the hunt goes on several fronts, in particular for:

The 12th workshop of the « Higgs Hunting » series organized on September 12-14th, 2022 will present an overview of these topics, focusing in particular on new developments in the LHC Run-2 analyses, detailed studies of Higgs boson properties and possible deviations from Standard Model predictions. Highlights will also include a first look at LHC Run-3 analyses, prospects from studies at future colliders, and recent theoretical developments.

Current plans are for the workshop to be held in person once again, to bring back the Higgs Hunting tradition of lively discussions during and after the sessions. Remote participation will also be made possible for those unable to attend in person. No registration fees are asked for remote participation.